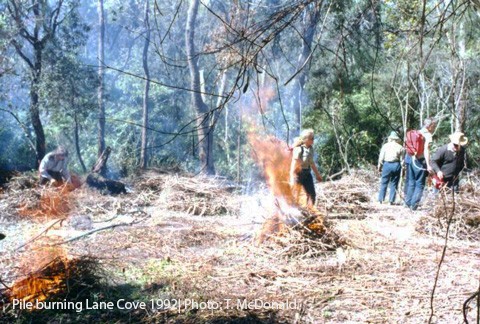 In Part 2 of our interview with Tein McDonald we discuss some insights from her thesis work in the 1990s and its links to current fire and restoration approaches.

Can you tell us something about your doctoral research?

The field work for my PhD thesis was undertaken during the early 1990s, looking at the resilience and restoration of damaged plant communities. I looked at a range of Australian vegetation types including of course sclerophyll vegetation. The study included experimental application of fire in a number Sydney sites in vegetation such as Blue Gum High Forest, Cumberland Plain Woodland and Sydney Turpentine Ironbark communities.

Since the 1980s researchers such as Doug Benson were promoting the use of fire in a restoration context. Based on their observations of what was happening in nature fire ecologists and field ecologists were predicting that this restoration response would also occur on degraded sites. Our role in this work was in piecing together the relevant information and putting these predictions into practice on restoration sites.

How does fire trigger regeneration in Sclerophyll vegetation?

Sclerophyll vegetation regenerates in response to fire because the plant species in these communities are adapted to long periods without fire and also to recover after fire, even in a healthy situation. Following fire they have the capacity to regenerate either by re-sprouting or soil stored seed. This capacity may remain, even in circumstances where the vegetation is degraded, including where the standing vegetation may be weeds rather than natives. Where natives are still present in the soil seed bank or there are root stocks present fire can be a great trigger to stimulate regeneration of those species.

How does this approach link with the Bradley Method?

The Bradley method was a key guide in restoration projects at the time, promoting an approach of ‘minimal disturbance’ but we eventually discovered that it was ‘optimal disturbance’ that gets the results.

Using techniques from the Bradley method in our reserves we had removed weeds such as privet but the recovery was limited to prolific native ground covers and rainforest-type shrubs and didn’t include the characteristic sclerophyll shrubs. This is when we started to use fire in these communities and demonstrate that fire can be an effective preliminary step for regeneration. For example regenerators simulated fire conditions by cutting down the weeds such as lantana and privet, piling them and burning small and medium-sized piles in order to get fire on the sites. We had sites with varying degrees of degradation and we were finding very good results. From these efforts they began to get some shrub species returning including wattles (Acacia spp.), tick bush (Ozothamnus diosmifolius), zierias (Zieria spp.) and hop bush (Dodonaea triquetra).

What happened following the 1994-95 wildfires in Sydney?

My studies became very interesting in late 1994 when we experienced a high intensity wildfire in Lane Cove National Park and extended our program to monitor a number of bush regeneration sites during their recovery. Following the fires the Australian Association of Bush Regenerators held a meeting with the Friends of Lane Cove National Park, forming 18 community bush regeneration groups at these sites. As a result of the ‘pre-treatment’ by fire these areas regenerated with unexpectedly high richness and density of natives. The weed treatment efforts of the volunteers ensured they were converted back to native rather than weed again.

What surprised you about the recovery of the vegetation following the wildfire?

These sites were highly degraded areas that had been ‘left to last’ to manage, with very high weed levels (often road edges and weed plumes below road drains). Due to the weeds present the sites had converted to mesic systems dominated by exotic rainforest species such as privet. We thought they had passed the threshold of reversibility and were not able to be burnt. We were surprised that so many species that we thought would not regenerate under those conditions were still present and did regenerate following that fire. Based on our previous efforts we expected we would need to clear and plant these areas to achieve any significant recovery but that didn’t end up needing to be the case.

Why did this difference occur?

The wildfire was hot and quick – providing just the right ‘pulse stress’ for these plant communities and the lethal temperatures for the privets. The important principle described by ecologists is that the temperature and the length of time the seed is exposed to that temperature is what is important. For example when we trialled very big pile burns that were hot, with fire persisting for a long period of time, we killed everything. In contrast creating a slow, smoky, grassy fire with a relatively low temperature over a long time did a very good job at triggering diversity. However, if seed is heated with a relatively cool fire for a shorter period it may be insufficient to cue it to regenerate at all.

Wildfires may be a brilliant support for restoration efforts but you can simulate them using slower, less hot burns. It is also possible to consider varying the fuel loads by putting piles in amongst the larger burn, creating hotter pockets that provide a range of conditions to support diversity of response.

Did you try any other approaches?

Where it wasn’t possible to achieve a pile burn we initially completed manual weeding to support the recovery of the grassy understory. Then we burnt the grassy understory on a day with relatively dry conditions, with low wind and maybe a touch of moisture in the soil to increase the heat delivered. This fairly slow, smoky fire supported more unusual species coming up and achieved excellent results.

Tein’s thesis work has informed her ongoing work with fire and restoration including projects on the NSW North Coast restoring Forested Wetlands in areas dominated by Setaria grass.

Read Part Three of this interview with Tein McDonald

Acknowledgement: We would like to thank Tein McDonald for participating in this interview.

McDonald, M.C., (1996) Fire as a tool for the rehabilitation of urban bushland affected by mesomorphic shrub invasion, Address to the Sydney Natural Resource Management Group, Windsor 30th May, 1996