Fire and Setaria in Northern NSW 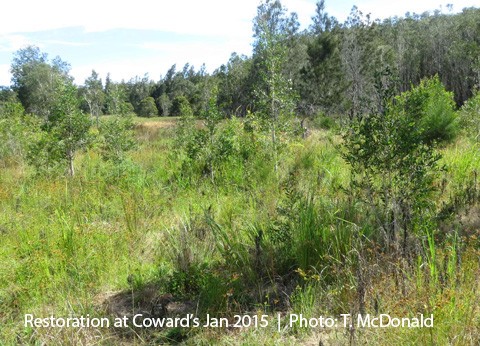 In the third part of our interview with Tein McDonald we discuss current projects on the NSW North Coast restoring Forested Wetlands in areas dominated by Setaria grass. Tein also explains how this work applies key principles from the recently published National Standards for the Practice of Ecological Restoration in Australia.

Can you tell us about your work with Setaria in Northern NSW?

In recent years I’ve been working on the Far North Coast of NSW where fire has been used as a preliminary treatment to assist with weed control and natural regeneration.

The sites we’ve been working on – Cowards Gap Road wetland and Minyumai IPA – are ex-agricultural sites that have been grazed for several decades leading to domination by weed pasture grasses. The native vegetation of these sites is Forested Wetlands, including many native sedges, some grasses and other beautiful wetland forbs like native buttercups (Ranunculus spp.). The trees naturally present are forest red gum (Eucalyptus tereticornis), swamp oak (Casuarina glauca), broadleaf paperbark (Melaleuca quinqinervia), swamp turpentine (Lophostemon suaveolens) and the occasional wattle (Acacia spp.).

The area we worked with initially was a 2.5 hectare site – Cowards Gap Road wetland – with 90-100 percent cover of tall Setaria grass (Setaria sphacelata) which is a very aggressive exotic pasture grass that can out-compete other species including all other pasture grasses.

What treatments have you been trialling?

When did you first apply the herbicide with this treatment?

The first herbicide treatments were applied by EnviTE contractors prior to winter 2012 as an overspray with glyphosate (1:100). This is necessary as setaria goes dormant in winter on the flats.

When did you burn and what outcomes where you looking for?

We burned the following spring (October) – a dry spring – as we needed hot and sufficiently dry weather to burn away all the biomass of grass, leaving a bare ash bed. It was important to burn all the biomass to flush out the soil seed bank. In the areas where the grass had been pre-sprayed we achieved a complete burn to the ground with no setaria biomass or unburned litter left. In the unsprayed areas, the burn was slow and less hot and of course the setarias resprouted and then had to be sprayed again.

How did you manage the regrowth following the fire?

There was massive regeneration from Setaria seedlings within 3-4 weeks of the first rains after the burn – but most of the natives were not germinating yet. This was the best time to apply a comprehensive herbicide cover across the site. The few natives present were impacted with this approach but more came up later. (It is important to avoid treating the Setaria too late when there is more significant germination of natives.)

Once the natives started to come back in greater numbers careful spot spraying of the weeds was necessary. In this work knapsacks were used with adjustable nozzles to carefully direct the herbicide. Form this point forward these treatments were needed regularly every 3-4 weeks to favour the natives and reduce the weeds.

How long is it necessary to keep treating the site?

Generally it takes about three years to consolidate a site against weed, but each time you visit you will be doing less work and the amount of spray will reduce as the natives recover. The hot burned sites recovered quickly but some poorly burned sites took much longer and much work is still required many years later. The best sites were where forested wetland woody species colonised from nearby and helped supress the weed, but some of the freshwater wetland sites also responded very well. You find that some patches respond quicker than others.

What challenges do these sites face?

One potential problem to be aware of is the need for timely treatment of weeds – you need to avoid missing their seeding even if it is a small quantity. We had some problems from leaving cuphea (Cuphea hyssopifolia), giant parramatta grass (Sporobolus fertilis), and polypogon (Polypogon chilensis).

Be vigilant at this time as you have an open site which is vulnerable.

A further problem to consider is that cattle and pigs love the post-fire situation so you must ensure these are controlled.

Are there further lessons from your work?

Interestingly the recovery at our first trial site was supported by two very big wind storms at the right time, blowing seeds to the site from nearby trees, supplementing recovery from the soil seed bank. Wind and rain is a fantastic combination.

We have also been applying a similar integrated fire and herbicide approach on a broader scale on a nearby site – in eight of about sixteen hectares cleared and dominated by setaria – at Minyumai IPA. The Indigenous rangers there trialled using a wick wiper drawn behind a quad bike to more efficiently treat the weed regrowth but this was not successful as the setaria tended to lay too flat and many of the natives were also quite high.  The workers found it was more effective to do the work using knapsacks – about every two weeks or so in the setaria flowering season and this works superbly as long as you put the time in prior to Christmas, when weeds seem to take advantage of families sitting down to Christmas dinner. This site proved to have fewer weeds and just as many natives so it has been pretty satisfactory. Although this wick wiping approach doesn’t work for Setaria it may work for other grasses that have more vertical leaves or flower spikes.

An important learning in this project was that even with 100% Setaria dominance and grazing for several decades there is still capacity for native regeneration, particularly if the sites are near remnant vegetation.

Earlier this year the “National Standards for the Practice of Ecological Restoration in Australia” were released. Could you give us three examples of how the Standards relate to this work?

Principle 1. Ecological restoration practice is based on an appropriate local indigenous reference ecosystem.

It is important to look at what you have present locally if you are looking for an ecosystem that will be resilient and reproduce in the future, because that is the one that has been successful for tens of thousands of years.

In this instance our target ecosystem was Forested Wetland, with remnant vegetation in the adjacent area providing a clear reference system in this case. We couldn’t really guess at exactly what species would come up though – because post disturbance vegetation is often different to later phase vegetation. So if you were planting a site you would need to include it all in your reference.

Principle 2. Restoration inputs will be dictated by level of resilience and degradation.

An important learning in this project was that even with 100% Setaria dominance and grazing for several decades there is still capacity for native regeneration, particularly if the sites are near remnant vegetation. But some highly degraded patches will need more work.

To determine the appropriate restoration approach a careful inventory of the site is necessary. At Cowards, we thought replanting may be necessary – at least of trees – as natives were not evident except in one place where there was a bit of bracken fern, and trees in this ecosystem tend not to store seed in a soil seed bank. So we tried regeneration first – and we were astounded by the richness and density of natives that returned, even 7 species of trees and shrubs. At Minyumai, though, the gaps were much larger and we anticipated trees would not come back as quickly as the groundcovers. So the rangers had another IPA group contract to grow 1500 trees of four species from seed collected on the 2000 ha property. This was a fairly accurate prediction, although some native trees have certainly germinated of their own accord.

So undertaking a resilience assessment prior to treatments enables you to take into account potential for species to regenerate on the site, so you don’t suppress them with mulching and planting or spray them out. Had we not taken this approach and just let the first flush of weed after treating the setaria inform our response we would have very different sites. We would only have had planted trees in a mass of setaria, without the benefits of diminishing the setaria and increasing a native ground stratum and soil seed bank. So we would not have built resilience – which is what regeneration is all about.

Engagement with landholders is very important in projects such as these where only ‘seed’ funding is available and the landholder is expected to complete the work. It is essential to involve the land managers in the works from the start, conducting burns and doing the follow up works so they are able to and look after the sites long term. Both of these sites also have conservation arrangements to provide longevity of the restoration efforts.

Do you have any final comments?

As the work continues on these sites one of the most encouraging outcomes is that we are seeing much greater species diversity than any human would have designed.

These methods have potential to be used more widely in other retired pasture areas in the region. For example there are other areas with Setaria that National Parks could purchase and use to increase connectivity between forested areas and wetlands. This may never happen, but if it does, there will be a group of Indigenous Rangers skilled up to take on the job of converting the setaria to functional native ecosystems again.

Read Part Two of this interview with Tein McDonald