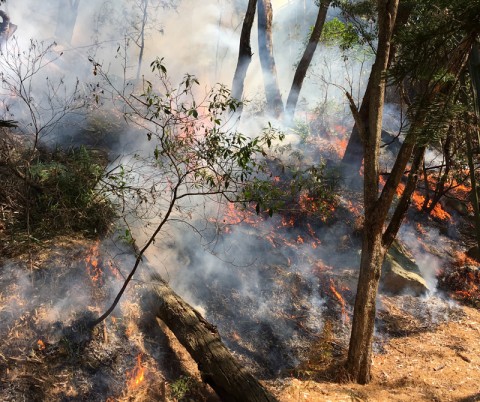 On the 21st of September 2017 part of Primrose Park Cammeray was burnt as part of North Sydney Council’s ongoing bushland rehabilitation efforts. In this two part interview Gareth Debney and Tristram Thomas from North Sydney Council share their experiences with fire and restoration on small parcels of long-unburnt bushland on the urban interface.

In part one of this article we learn why this site was selected and how it was prepared for burning. Part two of the interview features Council’s role on the burn day and their priorities for post-burn site care.

What vegetation is at the burn site and what was its condition?

Gareth: The burn area is mapped as Blackbutt Gully Forest which transitions into Angophora Foreshore Forest further up the ridge and contains semi-degraded creek-line vegetation on either side of the site. Primrose Park as a whole is in very mixed condition – in some parts it is our most degraded reserve but other sections are in relatively good condition.

It has taken us many years of rehabilitation work, with significant weeding and vegetation management over decades, to bring the site to a state where we felt we could achieve the best results from the burn.

The management objectives relevant to this burn are to address our statutory obligations for hazard reduction and also to support ecological restoration and improve the biodiversity of the bushland reserve.

Tristram: The burn area has two distinct sections – the northern section has greatest resilience and the more degraded section to the south has seen significant disturbance from water infrastructure and the presence of the zig-zag walking track.

The degraded section of the burn area was dominated by mesic species such as Pittosporum (Pittosporum undulatum), Cheese Trees (Glochidion ferdinandi ferdinandi) and Blueberry Ash (Elaeocarpus reticulatus) which lead to low diversity of shrubs and native ground covers.  In the top half of this section the native canopy trees that belong here such as Blackbutts (Eucalyptus pilularis) and Angophoras (Angophora costata) are absent, despite having remnant trees in the adjacent patches that could provide seed.  We hope the burn will help to restore these natural canopy species.

For the section with higher resilience we are aiming to increase the age structure as we have a well-established natural canopy of Angophora and Blackbutt with some very old trees and some medium aged trees but very few young trees.

How does your weed management connect with the burn?

Tristram: In these Dry Sclerophyll Forest systems that have evolved with fire the restoration outcomes can be really limited if we simply keep hand weeding them year after year without working towards putting a fire through. Having a burn as one of the end goals for the management can really help provide a shift in the ecosystem that will take the site regeneration much further.

In North Sydney, before burning our sites we generally aim to have the weeds to less than ten percent across the burn area.

This supports the post-fire maintenance so we’re not disturbing the site after the burn to keep them under control. Our approach also depends on the fire response of the weed as well, for example we really want to minimise any grassy weeds because they tend to come back very strongly after fire but we may tolerate some woody weeds in a higher density because they can be cut and used as fuel for the fire. 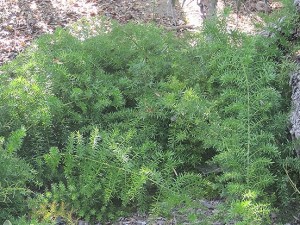 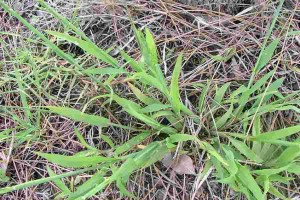 Why was this site a priority for burning and what is its fire history?

Gareth: We have created a mosaic map of burn parcels in the North Sydney reserves, identifying sites that need a burn and are likely to respond well and then preparing them. Our bush regeneration team assesses the sites and their management progress, considering the weed resilience, mesic shift and potential loss of species diversity from lack of fire.  They also consider the state of surrounding vegetation to ensure we can maintain and manage the regeneration post burn. We do our best to ensure the burn will have a positive impact on the site and our team take great pride in their burn preparation work.

Before this prescribed burn there was no known fire history for this parcel of land for at least eighty years.  In 2009 we conducted some trial pile burns in other parts of Primrose Park but we had a very poor response, confirming there was no in situ resilience in those patches. We then conducted small burns in 2010 and 2012 in other parts of the reserve and these demonstrated much greater resilience, so we were confident of the potential for good results from the current burn. We first proposed this site for burning in 2013-14.

Tristram: Some of the indicators for selecting this site were the senescing Casuarinas (Allocasuarina littoralis), lack of diversity in the shrub layer and proliferation of mesic species.  Also there had been no recruitment of the canopy trees for at least 20 to 30 years so fire was seen an important tool to support their germination.  An alternate approach could be to replant the canopy trees but the shrub layer and other parts of the ecosystem here are also enhanced by fire.  We see fire as being very important to kick start the natural regenerative processes so we don’t lose the diversity of species that have naturally occurred at this site.

How do you consider fauna and habitat values in your site preparation?

Tristram: One of our priorities is to assess the site from a fauna perspective, gauging what animals use it for habitat. There are some threatened species such as Powerful Owls that use this Reserve.  We then consider how to minimise impacts, noting breeding times, roosting trees or possible impacts of changes to vegetation structure. We walk over the site to see if there are any nests, drays or burrows and depending what we find we may adjust the timing of the burn or exclude some patches, weighing up what will give the best ecological outcome.

How do you manage the mesic species in your site preparation?

Tristram: To prepare the site we selectively cut these mesic trees over a period of about 12 months. We take a staged approach to this work, creating a mosaic of cutting over time to minimise the impact on the animals living here and to avoid drying the soil out and stressing other native plant species.  We also put signs up for the public – explaining what we’re doing and why. This is important to help prepare people for the changes in the site and help them understand our approach.

We take a lot of care with the timing of the site preparation, considering weather conditions, the seasons and the cycle of regeneration. If we open it up too early and the burn doesn’t go ahead, some regeneration will start happening but without the broad species stimulation that only comes from the fire. There is a fine line between how fast you are cutting it, trying not to disturb the ecosystem too much, and not going so slowly that the site starts regenerating itself before you burn it.

Mesic species were cut and left in place to add to the fuel layer for the burn.

We cut out some of the mesic species, working in a small mosaic, first removing plants under two metres tall from a patch. This makes the area open and safe enough to get in and cut some larger trees which we then chop into sections and either leave in place or move around the site if necessary. Due to the presence of so many mesic species now and the lack of understory shrubs the fuels on site can be limited. So, the chopped material adds to the ground fuel layer to help ensure we have patches of varying fire intensity to unlock the diversity of the seed bank.

All the resources from the mesic species that are cut go back into the site. The foliage and smaller branches are chopped up to add to the fuel layer and increase the heat and intensity of that fire in patches to unlock the diversity in the seed bank. To protect our large trees during the burn we avoid having too much fuel around the base of the tree, allowing the fire to be cooler close to the trees and hotter further away. We also place the logs that are left to stabilise soil on slopes, protect the edges and help keep people on the paths.

Gareth: I think the time and effort that we invest in site preparation is really important.  I realise this is only possible because of the small scale of our burn sites and this wouldn’t be possible for many other Councils but for us, and the approach we take in managing our Reserves, it makes all the difference between a successful burn and a missed opportunity.

Read Part 2 of the story here

Hotspots Fire Project: The interaction between Fire and Weeds: A booklet for landholders in NSW