Thinning Forests for Bushfire Management – Does It Work?

Home Thinning Forests for Bushfire Management – Does It Work? 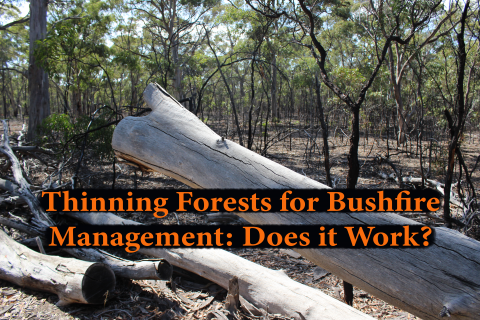 Particularly following the 2019-2020 bushfire season, various techniques to lessen the severity of bushfires have been discussed in great depth, with the mechanical thinning of forests emerging as a controversial method said to reduce future bushfire impacts.

Mechanical thinning involves the evenly spread removal of trees in a forest, with up to 50% of all trees being cut down. Proponents of the practice suggest that this should be done in order to lower the risk of fire and in order to achieve positive ecological outcomes, such as the faster development of large trees and associated features like habitat hollows.

However, a recent study published by researchers from the University of Melbourne and DPIE in the Forest Ecology and Management journal suggests that mechanical forest thinning as a standalone bushfire management strategy is not as effective as some may claim. The study examined the impact of the 2019-2020 bushfires on twelve sites in Gippsland, Victoria, with the sites varying in how they had been managed for fire in the years prior. These management techniques included both low and high intensity prescribed burns, mechanical thinning, and combinations of these treatments.

The study found that fuel loads were lowest where the forest had been previously prescribed with high intensity burns or had been treated with a combination of prescribed burns and thinning. In contrast, forests that had been mechanically thinned alone, without accompanying burns, had higher fuel loads than the sites that were simply not managed at all. These fuel loads proceeded to be highly correlated to how much the sites burned in the bushfire season, predicting 70% of the variability in burn severity. Indeed, the sites that were treated with prescribed burning did not ignite when the bushfire front reached them in 2020, whereas those that were thinned with no burning did. The study noted the prescribed burns remained beneficial for at least three years in regard to hazard reduction.

However, different academics from the University of Melbourne have previously presented an alternative view in their article in the Conversation from 2020. They indicated that forest thinning is an effective and widely used technique for reducing bushfire severity, especially when combined with prescribed burns as noted above. They point to previous research from the US and Spain, which found reduced severity and tree mortality in sites that had been thinned. They point to their own research paper published in the Science of the Total Environment journal, which modelled a combination of thinning and burning to be an effective management strategy. They did, however, note that once again thinning without accompanying prescribed burns can increase fuel hazards.

Some researchers are critical of this modelled approach, however, and, like the findings of the first study presented suggest, believe that mechanical thinning has no or even negative effects on bushfire severity, and is not an effective management strategy. Speaking to the Sydney Morning Herald and the Guardian, scientists such as ANU’s Professor David Lindenmeyer have described the idea that mechanical thinning is an effective strategy as “misleading” and “simply wrong”. Due to stronger winds, drier leaf litter, and a denser shrub layer, they have suggested that fires will spread quicker and be more intense after thinning than if the forest was not managed at all. Indeed, Lindenmeyer’s own study on Victoria’s 2009 bushfire season indicated that thinned forests burned as bad as, if not worse than, unmanaged forests. Lindenmeyer notes that studies that suggest that thinning is effective are usually based off computer modelling, whereas those that find the inverse are often based off real-life data. Professor David Lindemeyer’s presentation on the link between logging and fire severity at the Nature Conservation Council’s 2021 Bushfire Conference can be watched here: https://vimeo.com/566933450#t=1h11m45s

The effectiveness of mechanical thinning will likely continue to be debated, with a clear requirement for further research on the topic before the efficacy of the practice can be truly understood. For now, however, it would appear that the building consensus surrounding mechanical thinning is that it is not effective as a standalone method in lowering bushfire severity and may potentially have the inverse effect to what is desired.

Leave a reply Click here to cancel the reply