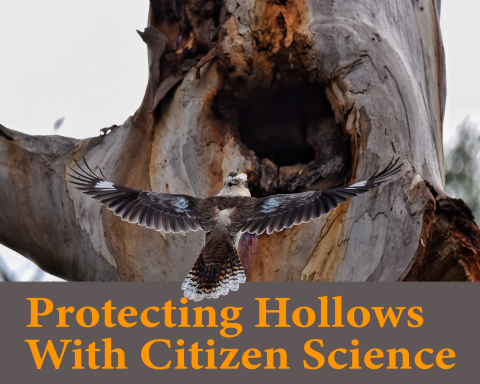 Around the country, communities are using the power of citizen science to help protect a highly ecologically valuable and quickly disappearing natural resource – hollow-bearing trees.

Tree hollows serve as vital habitat for many native species to nest and shelter, including various threatened species such as yellow-bellied gliders and powerful owls (learn about how we’re working to help conserve large forest owls here!). In Australia, they primarily occur in eucalyptus trees that are at least 100 years old, with larger hollows often taking more than twice as long to form. Unfortunately, this means they do not readily regenerate, and so factors such as land clearing and logging have resulted in a large drop in hollow-bearing tree numbers throughout Australia, putting great pressure on the species that rely on them to survive and reproduce. Losing them has large effects on biodiversity and ecosystem function through the loss of hollow-dependent species, meaning keeping as many as possible in-tact within remnant habitat is critical.

Bushfire can play both a destructive and formative role for these hollows. Fire can damage and remove the outer bark layers, allowing organisms such as termites and fungi to access the inner heartwood, facilitating the formation of hollows. Furthermore, fires that reach the canopy can damage or remove upper branches, which may then form hollows to be used as habitat by native fauna.

However, unless precautions are taken, even low-temperature burns, wild or prescribed, can lead to collapsed trees and the destruction or damaging of these hollows. Fortunately, there are ways to prevent prescribed burns from having these negative impacts on hollows, as outlined here in our Hotspots Fire Project hollows factsheet. The first step to doing this is recording the locations of these habitat hollows, and that’s where our citizen scientists come in.

Using the Tree Hollows + Significant Habitat Trees dataset on the iNaturalist citizen science platform, a country-wide database of these critical habitat features has been forming, noting the locations and details of important tree hollows and habitat trees throughout Australia. The dataset was set up by community members who attended the Nature Conservation Council Bushfire Program’s recent workshop in the Kangaroo Valley and has grown in number of entries and contributors since. The database is publicly accessible, meaning you can look at the location and details of these hollows around the country (including what animals have been seen using them), and contribute towards the dataset in your local area.

Image by Geoffrey Moore via Unsplash

Leave a reply Click here to cancel the reply