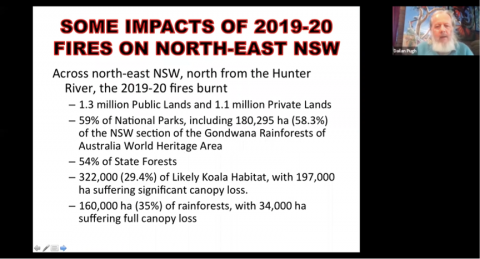 How have the fires impacted on flora and fauna? And are there any species that are threatened with extinction?

Unfortunately, there are many threatened plants and animals that have had all or most of their known habitat burnt, including species known to be vulnerable to burning. Many of these species were already threatened with extinction before the fires, and the fires have undoubtedly hastened this process. Unfortunately, despite the Commonwealth identifying the need to survey to assess the status of those species likely to have been most significantly affected, I am not aware of surveys for many such species.  The Commonwealth identified 90 priority NSW animal species, and 32-34 threatened NSW plants with >90% range affected and 76-99 with >50% range affected. Until people look we won’t know how severely they have been affected.  Despite the apparent dire straits of many such species, the NSW Government hasn’t excluded their habitat from logging or clearing.

What is the estimated effect of the fires on the distribution of feral animal species in the rainforest ecosystems?

Burnt areas are favoured hunting areas, initially for dead and injured animals, and in the medium term because of the loss of cover and refuges. I am not aware of any estimates of effects of increased hunting pressure within burnt rainforests, though I have no doubt it is significant.

Dailan, how do you balance reducing fuel levels vs retention of “coarse woody debris” for habitat?

I am concerned with the push for frequent burning because of the impacts on the logs that many animals inhabit, and the plethora of invertebrates that use them and leaf litter, which in turn provide food for an array of animals that forage on them. The importance of mulch for gardening is recognised, though the important function of mulch in forests is often ignored.  It is not just fuel, its important for maintaining healthy soils and a functioning ecosystem. The difference in the impacts of the fires on the mulch and logs in wet forests subject to infrequent fires and regularly burnt dry forests was stark, with dry forests reduced to bare soil. I also have concerns about the loss of understorey plants that are obligate seeders where fire is too frequent. I favour the approach of Zylstra of trying to maintain some areas of forests fire free for the decades needed to restore their natural resilience to fire. Achieving a balance between fuel reduction burning and maintenance of ecosystem processes in forests that have been fundamentally altered by logging, grazing, weeds and European fire regimes, in an era of climate heating, is a vexed issue with no easy answers.

What are the expert’s thoughts on how Visual Artists can assist?

It is well established that exposure to natural environments reduces most people’s psychological and physiological indicators of stress, while improving their mood and happiness. The experience can overcome mental fatigue and restore cognitive function. Visual representations of nature can have similar, though reduced, effects, thereby also being beneficial for people’s mental and physical health. Such exposure can also help facilitate people’s emotional connection to nature and places.

Depictions of the devastation caused by the fires may not have such beneficial health effects, though are important to establish an emotional connection to the consequences of the fires.

Riparian vegetation only represents a small portion of the landscape, yet is of the utmost importance in maintaining terrestrial and aquatic biodiversity. Many species of plants and animals only occur, or are in far greater abundance, in riparian areas, with their importance increasing during dry periods. Livestock often preferentially utilise riparian habitats for food, shade, cooler temperatures, and/or access to water. Aside from clearing, livestock have been identified as the primary cause of widespread and large-scale degradation of riparian habitat in Australia, altering vegetation structure, promoting weeds, eroding streambanks and polluting waters. Livestock make riparian vegetation more vulnerable to burning, and burning makes riparian areas more vulnerable to the impacts of livestock.

What role does lantana play? Is it a major fuel source?

Lantana is the most widespread and successful weed throughout north-east NSW’s forests, benefitting from logging and other activities that open the forest canopy enough for it to thrive. Lantana now dominates the understorey in tens of thousands of hectares of northeast NSW’s forests. The NSW Scientific Committee has listed the ‘Invasion, establishment and spread of Lantana (Lantana camara L. sens. lat)’ as a Key Threatening Process, noting “There is a strong correlation between Lantana establishment and disturbance …, with critical factors being disturbance-mediated increases in light and available soil nutrients”.

Its worst manifestation is where it becomes so dense that it allows Bell Miners, and thus sap-sucking psillids, to proliferate initiating Bell Miner Associated Dieback. Bell Miners exclude most other native species and facilitate an over-abundance of psillids, which literally suck the life out of the eucalypts. There are likely in the order of 100,000 hectares of north-east NSW’s forests affected by this dieback. Such degraded forests, dominated by dead and dying eucalypts over a sea of lantana, are particularly vulnerable to burning.

A variety of studies have found that lantana is particularly flammable and responds well to disturbances, such as fire. Though its preference for wet gullies and rainforest margins limits its burning in low-intensity fires.  In dry times lantana is considered primarily to facilitate burning of vegetation by creating pathways from ground fuels into tree canopies, so it can be particularly devastating for disturbed rainforests when it increases fire intensity and carries fires into canopies.

There can be no doubt that lantana accentuated the impacts of the recent fires due to the dryness of the vegetation, particularly in gullies and disturbed rainforests.

Though the fires killed large areas of lantana, creating an opportunity to control its return, it is recommended that as a matter of urgency widespread control of Lantana and other weeds be undertaken throughout burnt forests, focusing on bad weed infestations, rainforest ecotones and areas of Bell Miner Associated Dieback.