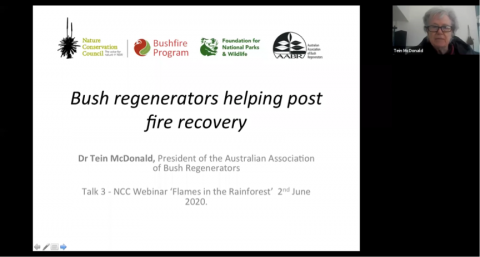 Given a lot of weed invasion is caused directly, or indirectly by various natural resource exploitation industries, should the cost of weed management and landscape restoration be charged directly to those industries, rather than having volunteers used?  If so, do you have any suggestions how that should occur?

It is safe to say that much of the damage from fire is on sites that have been compromised prior to fires – but it is not always easy to attribute an infestation to a particular source, let alone industry. Responsibility to minimise weed legacies should be included in the closure criteria for mining or logging projects, although that doesn’t always happen. The public is still going to have to foot the bill for weed impact arising from e.g. state-operated forestry programs (e.g. Lantana domination of understories, leading to BMAD) or tourism in reserves. Biosecurity responsibilities do apply to all landholders, industrial or not – but again it is difficult to attribute responsibility, particularly where birds and wind will carry seed, incrementally, over large areas.

Is there support from public and local communities in bushfire-affected areas for the rehabilitation of native rainforests?

The cause is charismatic enough to attract public and community support but much has dropped away due to COVID claiming the limelight and preventing action on the ground. Around $350M or so has been directed by the Federal government to post-fire environmental response, and rainforest is a focus of much of the latest funding round… but it is still unclear where the funding has gone or will go.

Currently, we have seen very little financial support going to remove weed from rainforest streamlines, which is extremely concerning because of the time-sensitive and tricky nature of this task. Landcare and neighbourhood groups are working hard but it seems the wheels of bureaucracy (even for philanthropic funding) are moving too slowly to deliver financial support for skilled workers in time to avoid much damage or more costly work in the longer term.  We hope that this and the two other tasks (converting combustible weeds at rainforest edges to rainforest buffers and managing fuel around rainforests) could attract community action and some public or philanthropic funding in the medium-term,  but again, commitment to coordination of this is frustratingly slow for everyone and as yet unclear.

Is anyone doing any studies on what they expect the changing forest landscape is going to be post-fires and how we learn to adapt?

I believe that there are studies afoot to track recovery of known threatened species and communities with respect to fire severity. But it is clear that there may be compositional changes – even ‘state’ changes on some sites (e.g. shift from rainforest to sclerophyll or sclerophyll to heath). Many of these are not likely to be unprecedented and I believe that we can adapt to this. I think the most concerning shift is not the shift to sclerophyll from rainforest but the increased density of sclerophyll (Eucalypts and wattles) that makes it hard to manage fuel loads, particularly with legal restrictions on consecutive burns for acacias.  I think that the adaptation we need to learn is to use fire to reduce wildfire risk. And of course, we need to adapt to the need to mitigate climate change…not adapt to climate change.

Have you observed myrtle rust affecting the regrowth shoots? If so, how bad is it?

That is a good question.  It would be good for people to particularly lookout for this and observe protocols when entering burnt sites that are unaffected if coming from sites that are affected. I have observed native pathogens and insect attacks, which is a good sign that processes are returning – but it would be important to hear of any observations of myrtle rust, including in areas where it was already known to occur.

What is the best way to get rid of Lantana? Any suggestions how best to control Lantana on such a large scale? Biological control organised state-wide maybe?

Many biological controls are under trial for Lantana but there is still no silver bullet there.  High-intensity fires have actually killed a great deal of Lantana, so in many areas it is not the Lantana that is the problem, but the weeds that comes up after it (e.g. Inkweed, which can be quite dense and can suppress natives).  In some other cases, the weeds that follow Lantana (e.g. Solanum spp.) can be somewhat ephemeral and not suppress natives, particularly rainforest ones. The most cost-effective technique for any weed control post-fire is probably spot spraying, a task that landholders can learn rapidly but does not suit community volunteers. Less intensely burnt lantana can be pulled by volunteers though, and you have time till it seeds. But the main message I think is that there is a great opportunity offered by fire to gain leverage over such weeds, as seedbanks have been flushed or destroyed, and we can tip the recovery well and truly in favour of the natives, setting many weeds back hugely – if we get in early enough.  Which means NOW.  So landholders and public agencies need to get organised for doing your best NOW. AABR is always open to providing whatever guidance we can.

How will the seed bank and the recovery of plants be affected?

Rainforest seedbanks are largely confined to pioneers, and in sites I have seen, these are regenerating well as the fires in rainforest were not so intense. There has also been much root suckering of rainforest species.

What are the experts thoughts on how Visual Artists can assist?

Artworks can be a great way to keep the public interested, particularly during COVID.  Lots of photos of regeneration could be good, plus shots of where help is needed, e.g. to remove weeds. Spread the images by social media and link it to the campaigns of the NGOs working on this – e.g. WWF, AABR etc.

There was support form Blazeaid for farmers to replace stock fencing, with priorities being property boundaries, but understandably not to replace burnt fencing to protect streamlines. This is an important priority.  AABR will attempt to raise this with the funding bodies and ask Landcare what options exist for landholders.