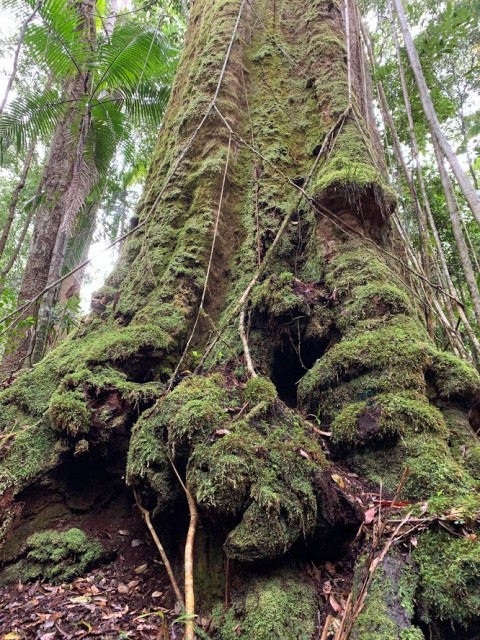 Kim Stephan, ecologist and NCC representative on the Far North Coast Bushfire Management Committee, shares her insights on the effect of fires in old-growth forests. This article originally appeared the Tweed Landcare’s August 2020 edition of the Grassroots Gazette.

There is something breathtaking about really big, old trees. Something that makes us gasp in awe and try to take in the sheer size and age of these trees.

Old growth forest, also termed primary or virgin forest, is forest that has attained great age without significant disturbance and thereby has unique ecological values. It is distinguished by an overstorey of large, old trees that are over mature (senescent or partly dying) with hollows and dead branches in the crown. In Australia, some of these trees exceed 350 years of age. The foundations of some of the oldest forests, notably rainforests, have species with genetic links to Gondwanan rainforest millions of years old. These forests are complex with numerous structural layers including deep, organic woody debris on the forest floor, elaborate root systems, and trunks and canopies that scaffold numerous other life forms. This diversity of structure leads to great biological diversity and old growth forests are home to many rare species of plants and animals that require specialised habitat only found in old growth and essential to their survival, species such as  Spotted-tail quolls. Many of these species are threatened with extinction due to the pressure on old growth forests from clearing for development, relentless logging for timber, climate change and the increasing prevalence of high intensity wildfires.

In the 2019-2020 summer bushfires we witnessed the rare site of rainforests burning, many of which have never before seen fire, at least in living memory. Many large, old trees were reported to be burning weeks to months later, sometimes falling and spreading fire into unburnt areas that were a tinder box after the long drought and hot summer conditions. Low to moderate intensity fire in sclerophyll old growth and on the edges of rainforest is a frequent occurrence that can help reinvigorate the forest and promote the formation of hollows in standing trees. However, due to the lack of rain, drying out of the normally moist leaf litter layer and increased leaf litter due to trees dropping leaves from heat stress the rainforests burnt. Although some rainforest species will regenerate after fire, this type of high intensity fire can reduce the extent of rainforest by favouring more sclerophyll species and wipe out whole species that are not fire adapted. Intense wildfire can cause total destruction of senescent trees, which are susceptible to incineration because of dense leaf litter surrounding the trees and hollow trunks and branches that act as chimneys drawing the fire up through the centre of the tree, to the tips of the branches and deep down into the the roots. Very few trees can remain standing after that.

Botanist Nan Nicholson and Lismore Council recently reported “that the fire was mostly restricted to sclerophyll areas dominated by eucalypts, Brush Box, casuarina and Turpentine”. “Fires in the rainforest were usually due to one of the tall sclerophyll trees burning and falling into the rainforest.” “Bangalow palms ignited due to the dry fronds, causing intense heat and literally boiling them.” They also noted the sad loss of old trees with hollows.