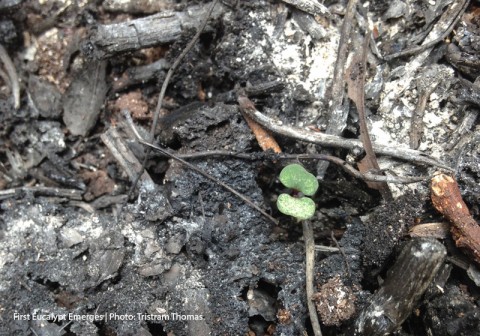 Read Part 1 of this article here

In part two of our interview with North Sydney Council staff Gareth Debney and Tristram Thomas we hear what Council’s role was on the burn day, their strong working relationship with Fire & Rescue NSW and their priorities for post-burn site care.

The Primrose Park Zig Zag track burn was planned and conducted by Fire & Rescue NSW with Rob Strauch as the Bush Fire Officer. This was a small burn of 0.45 hectares with a 5 – 10 degree downhill slope and intended burning conditions including an FDI between 4 and 16. The burn was implemented on 21st September 2017 with support from North Sydney Council staff, successfully reducing the overall fuel load from very high to low.

Do you have any tips for other Councils hoping to achieve burns on small land parcels?

Gareth: In North Sydney our burns are generally a lower priority as we have relatively small sites with lower risks, compared to other land management agencies in our Bush Fire Management Committee (BFMC). But this can also be an advantage because when conditions aren’t conducive for other, larger-scale burns to go ahead, we may have the ability and conditions to safely burn. We have also built a strong working relationship with the Bushfire Officer from Fire & Rescue NSW for our area and he is very supportive of what we’re trying achieve ecologically. He’ll never compromise on safety but he does discuss the burn plan with us and considers how its implementation can complement our rehabilitation objectives. 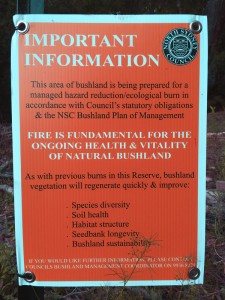 North Sydney Council placed signs around the site to keep the public informed of the regenerative works being carried out.

Tristram: We make sure we inform our Bushfire Officer when our sites are about 75% prepared so we can look at scheduling the burn and when it’s ready to go we invite them out on-site to work out the best location for the control lines. It’s really important that the fire agencies are aware that the site is sitting there ready to go when there’s a suitable weather window.

Gareth: We then do all we can to fit into any opportunities that come up even at very short notice. If Rob calls and says, “I’ve got a window.”  We’ll respond in an instant and do all we can to fit into this window – issuing notifications, finalising the site prep and clearing our schedules. Sometimes this happens when conditions are not quite right for a larger burn but all the resources are lined up. This flexibility has really helped us increase the number of burns completed over the past decade.

How are the Council team involved on the burn day?

Tristram: As several of our staff have Basic Fire Fighter training Fire & Rescue allow us to be observers on the fire ground and help out with some activities such as being on the hoses and the control line, walking around with the drip torch, learning how to properly set fire to it in a strategic and controlled way.

Gareth: The amount of involvement we have as a team on the fire ground is of great benefit, allowing our team to work shoulder to shoulder with the fire agencies and develop their skills. To reach this point we’ve invested in staff training and PPE and gradually over time we’ve built a stronger relationship with the fire agencies and developed the trust needed to have our team participating in the burns.

Being present at the burn really helps everyone understand fire and how fire responds in our context, observing what’s worked well and what hasn’t worked so well.  We can then incorporate those learnings into how we prepare the site and sometimes how the burn is conducted on the day.

For example, in some earlier burns we placed less attention on the fuel loads and this gave us inconsistent germination across the site. The patchiness of the fuels meant the fire didn’t carry over some of the depressions and hollows. To support better germination we needed to read the landscape, read where the fuels are deep and shallow and supplement fuel where it’s not likely to carry what is essentially a low-intensity fire.

Tristram: Another important lesson we’ve learnt over our years of burning is that if the blacking out is done in the wrong way it can really limit the germination results on our small sites.  When we’re burning, we want to ensure there is heat into the lower parts of the soil to promote germination.  If the fire is put out too quickly this can reduce the quantity and diversity of species regenerating. We aim to allow the fire to burn and have the ash bed sit there and cook and burn down for at least an hour, with people watching the edges of the burn to ensure it remains under control.

When people have been trained to quickly put out house fire or car fires they often bring this approach to the bushland fire ground also. In our context strong jets of water can wash all the top soil away, carrying the seed bank with it. This creates pools of seed all in one area with seeds then competing with each other for space and other areas where there is no seed at all. To avoid this loss of seed the Bushfire Officer from Fire & Rescue NSW encourages crews to use a relatively fine fan spray when possible.

How do you care for the site after the burn? 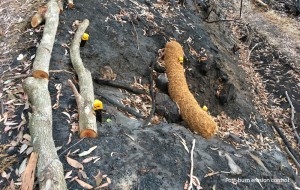 Tristram: Following the burn we put strategies in place to protect the site from any damaging influences, managing erosion, keeping people on the formed tracks and ensuring the surrounding areas are maintained to minimise weed impacts.  We aim to minimise the number of people working on our sites to avoid people walking on the fresh ash bed and causing soil compaction.

We install sediment fences to stop weeds and help manage erosion and put up orange hazard fencing to keep people out of the area. We use logs from the mesic species we cut during preparation to create clear edges to the tracks and to help stabilise steep areas prone to erosion. We also lay logs down in some sections to access the site without trampling the ash bed. We aim to walk on stones, roots and logs to minimise damage to the ash bed. The logs can also create a microhabitat for wildlife. Most of the materials that we cut down in the site preparation get used to support healing in sections of the land that need it afterwards.

How do you manage weeds after the burn?

Tristram: If we get rain soon after the burn I’ll be checking the site from about 4 to 6 weeks out to start doing weed sweeps as the grassy weeds are likely to come back quite quickly.  The period from 6 weeks to 3 months post-burn period is when the weeds response starts to intensify.  If we’ve done good site preparation, not had too many weeds on-site previously and put in our sediment fences then minimal weeds should come back up.  When there are weeds it’s that first three months that’s really critical to get in and manage them before they set seed.

Weeds may grow back before the natives in these areas, especially with the nutrients from the ash. The open ground from the burn gives you a really good chance to get in there and treat weeds with tubers and underground root systems that may have been difficult to access before such as Madeira Vine (Anredera cordifolia) or Morning Glory (Ipomoea sp.).

How do you monitor and manage the response of natives?

Gareth: As our reserves are relatively small our staff are able to monitor the post-burn response as they are regularly working on-site, however we don’t have the resources to conduct formal surveys. We’ve recorded at least half a dozen new species following recent burns in our reserves and also have the bushcare and community wildlife watch reporting back to us.

We keep an eye on the composition of regenerating plants as they may not be representative of the surrounding vegetation. The long absence of fire has disrupted the natural rhythm of regeneration and so this may need intervention post-burn. What we found is if we don’t invest the time and the effort to manage this up front then the result is compromised down the track.  We end up with a simplified, less biodiverse vegetation community and subsequently a lost opportunity.

Tristram: We may need to manage the native species from about 12 to about 24 months after a burn, once the regeneration has started to thicken up again. We sometimes have really thick blankets of ferns growing that swamp other natives while they’re small. This can fill all the open ground and stop the Eucalypts from germinating.

For example we may get an overabundance of species like Commelina (Commelina cyanea), Basket grass (Oplismenus sp.), Kennedia (Kennedia rubicunda), Pandorea (Pandorea pandorana). These plants have continued to live in the unburnt areas and have seeded while other local species like Grevilleas and Acacias haven’t been present except in seed bank.  So we remove some of these overabundant species to create space for the less common species, supporting them to grow to maturity and replenish the seed bank over several seasons.

What we’re aiming for with the post-fire maintenance is to reset the species balance and encourage the diversity that was here previously, setting the site up for the next burns that will happen in 20 to 30 years from now.  That’s the end goal for these Sclerophyll forests in North Sydney.

North Sydney Council’s page: Bushland and Fire in North Sydney
Return to Part One of this article