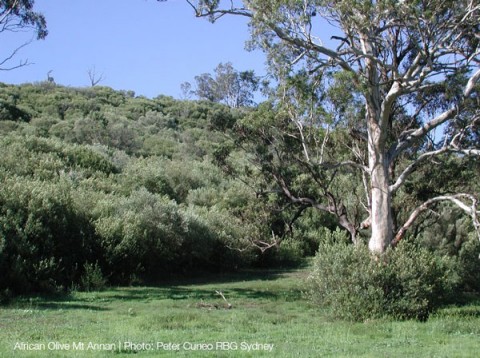 Felipe Aires completed his PhD in 2015 at the University of Sydney’s Faculty of Agriculture and Environment, investigating the “Effects of woody weeds on fuels and fire behaviour in Eastern Australian forests and woodlands.” In this interview we hear about Felipe’s work with African Olive and Cootamundra Wattle and his suggestions for integrating fire response details into the weed databases.

What was your research about and who were you working with?

My research looked at the impact of specific weed species on fire fuel loads and vegetation structure and was conducted through the University of Sydney with financial and networking support from the Bushfire Cooperative Research Centre (now the Bushfire & Natural Hazards CRC).

During the field work component of the research I worked closely with the Royal Australian Botanical Garden at Mt Annan and the Red Hill Nature Reserve in the Australian Capital Territory (ACT). At Mt Annan the case study focused on the impact of African Olive (Olea europea ssp. cuspidata) in Cumberland Plain Woodland and at Red Hill the focus was on a native woody environmental weed Cootamundra Wattle (Acacia baileyana). We also conducted flammability testing at the University of Sydney.

Why did you decide to research this topic?

There is very limited information available about the flammability of weeds. The aim of the thesis was to investigate the interaction of bush fire and invasive plant species. I decided to focus on two woody weeds as grasses have been getting more research attention than woody species, both in Australia and around the world. I was interested to investigate how woody weeds altered fuel loads and the changes caused to the horizontal and vertical structure of the vegetation communities. I also wanted to measure the flammability of the weed species and compare how it varies among species.

What is the weed status of African Olive?

African Olive is a listed as a noxious weed in 11 local government areas of NSW and has been listed as a key threatening process under the NSW Threatened Species Conservation Act 1995 and is also a problem in some areas of South Australia and the ACT. When it invades native bushland it creates a dense canopy that restricts the growth of native plants in the understorey, leaving a monoculture of Olives that transforms the ecosystem if it is not controlled. 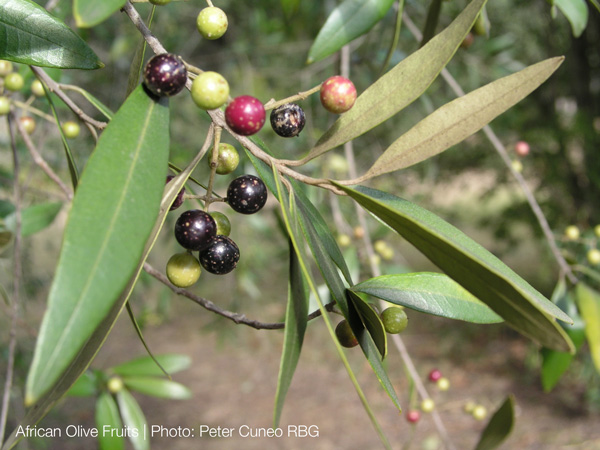 How does African Olive influence fuels and flammability?

My research compared the fuel load, fuel structure and flammability at three different sites. Site one was an area of relatively pristine Cumberland Plain Woodland with no invasion of African Olives. Site two had been invaded by African Olives for more than 15 years, with mature trees forming a canopy and limiting the understorey species. Site three had an ‘intermediate’ level of invasion, with immature African Olive trees. In areas densely invaded with African Olive (site 2) there was an increase in fine fuel loads, vertical distribution, fuel hazard score and flammability when compared with the other sites. The changes in fuel loads and the distribution of fuels due to the invasion of African Olives into the natural system is likely to result in changes in fire behaviour and this will increase the risk of more intense fires if the right weather conditions allow.

“This study has shown that vertical changes in fuel distribution promoted by African Olive associated with a deeper litter layer and a different light environment under the trees can have an important impact on fire behaviour in invaded areas.”

Why is Cootamundra Wattle considered a weed?

Cootamundra Wattle (Acacia baileyana) is a native species, however it has become very successful well outside its natural range as it is an attractive garden plant that has been cultivated since the 1800’s.  This allowed it to spread from plantings by humans and is now a problem in some areas of NSW and the ACT and is spreading north. This species matures quickly and forms dense leaf and pod litter that can exclude many indigenous species, whilst allowing many exotic grasses to flourish. 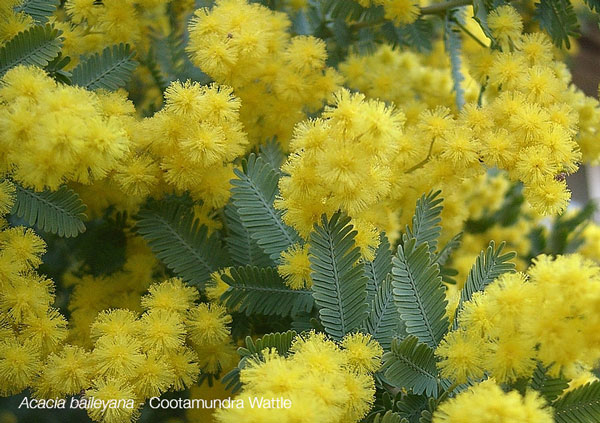 How does Cootamundra Wattle influence fuels and flammability?

My research at Red Hill compared the fuel load, fuel structure and flammability in three different sites: one heavily-invaded with Cootamundra Wattle, a second sparsely-invaded and a third site with relatively pristine woodland. The results show the presence of Cootamundra Wattle changes the vertical distribution of fine fuels and increases the fuel hazard rating, but does not change the flammability of the fuel.

“The presence of Cootamundra Wattle in Yellow Box-Red Gum Grassy Woodland in the ACT causes the vertical structure of the fuel to shift upwards towards the canopy and to be more evenly distributed vertically. This promotes a higher fire hazard in invaded sites compared to natural uninvaded areas.”

What other areas did your thesis investigate?

When considering weeds and flammability home owners often ask “What plants can I use near my house to reduce the spread of fire or fire impact?” and land managers ask “Which areas should I prioritise when I’m managing for fire and weeds.” I wanted to work out if we could rank species according to their flammability, to help indicate which species are worse than others. Currently there is very little evidence based information available about how invasive species can change fire behaviour and even less in terms of flammability. One of the challenges with drawing any conclusions with this work is that flammability studies tend to look at only one or two of four different components of flammability, making it difficult to compare data. I tried to look at all four traits to help to come up with a ranking system: ignitability – time taken to ignite; sustainability – duration of flaming combustion; combustibility – rate of mass loss or burning rate; and the consumability – residual mass fraction. This is a controversial area, and while I may have contributed towards some answers there is still a lot we need to learn to consider how to answer these questions well.

How could research similar to this influence weed classifications and fire behaviour modelling?

Practitioners are interested to know the answers to questions such as: “If I have this weed species how would it change my fuel loads?” or “How would it change my forest structure?”  I believe that we need a weed classification framework capable of absorbing fire-related data to support people who need to manage land for both fire and weed risks.

The existing national and state-based systems used to rank weeds in importance don’t take into account the impacts that the presence of these plants may have on fire regimes or fire behaviour. Including a more comprehensive fire section on weed profiles that incorporates information about the fire-related life history, plant flammability and impacts on fuel structure and fuel loads could lead the industry to a more effective approach to managing invaded areas.

Current fire behaviour models are not capable of capturing the influence of weeds which may mean they are inaccurate or may contribute to inadequate responses. We could design completely different responses to fire in some weedy areas if we had more knowledge about how the weeds would be likely to influence fire behaviour. In the Northern Territory for example, the invasion by Gamba grass has been shown to lead to much more intense fires, with a much higher rate of spread than with the native grasses. This work may also be relevant to agencies such as the Australasian Fire and Emergency Service Authorities Council (AFAC) who are currently developing a national classification system for fuels. It is important to consider how weeds will be incorporated into these classifications in a way that supports fire behaviour modelling and analysis.

What is needed to support effective approaches to integrated fire and weed management?

When looking for the most effective ways to manage weeds in the context of fire it is really important to look at each weed individually, case by case. Compiling the available data and information is very important as currently the only way to learn is to search for people that are working with similar problems.  It would be very helpful to have a weed management framework that is accessible to all and capable of absorbing the fire-related information being produced. This is essential if we want to make use of the successful strategies developed in current trials and create opportunities to apply and test this understanding in other areas.

Practitioners will also need to come together and establish a strong network to define the most important questions to be addressed. We need more research and also need to bring the existing and emerging knowledge together in a place that we are able to share.

Important areas for further research include:

Felipe’s comments are a reminder of the value of the Fire and Restoration Network as it aims to provide a platform for sharing and networking on fire-related environmental projects, including integrated approaches to managing fire and weeds. We encourage you to share your fire and weeds projects here so others are aware of your work, can learn from your results and develop approaches relevant to their local areas.