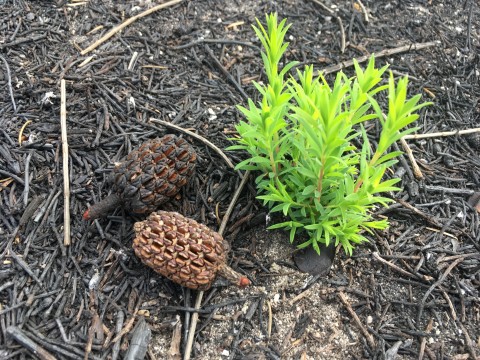 Germination expert Dr Mark Ooi, a plant ecologist from the Centre for Ecosystem Science at the University of NSW recently presented at NCC’s Fire Ecology Workshop held in Lake Macquarie. This transcript highlights components of Mark’s presentation related to fire and seasonality.

Fire is the main driver for plant populations and there are many elements that make up a fire regime. One of the main components that I have been studying is the seasonality of fire. Most hazard reduction burns that occur today are not during the natural fire season. In addition to this, climate change has started to cause a shift in the fire season with data showing the fire season is changing, shifting away from the peak period and spreading out from that peak as well. If we want to be able to manage these systems then it is important to understand the effects that these aspects of the fire regime will have on ecological communities.

Many species such as Boronia and Ericaceae need specific seasonal temperatures to break their dormancy before they become responsive to smoke. We have done some work on Boronia species in the Blue Mountains area which has quite high altitude and cold temperatures, as well as Asterolasia buxifolia which is listed as Endangered in NSW under the Threatened Species Conservation Act 1995.  This species only germinates if it experiences seasonal temperatures of around 11 degrees (Celsius) during the day and 3 degrees at night along with smoke either via the air or dissolved in water. For this plant seasonality is really important and you can’t break dormancy without season being involved. Therefore, if the fire season changes this may change the way these species respond.

Question from audience: If a wildfire goes through the Blue Mountains area during summer and these lower temperatures are not reached will the seeds be destroyed?

Mark Ooi: No, the way the seasonal temperature cycle works for Asterolasia is the seeds will remain dormant during summer and as the conditions cool into winter the seeds will start becoming responsive. This doesn’t mean that they will germinate simply with the cold, but if that fire cue comes through and you get smoke then they will emerge but not until winter. They will not germinate in summer even if there has been plenty of rainfall, which means they are very strongly linked to their seasonal temperatures.

Question from audience: How long will that smoke cue last? If there is a burn or fire during January or February, during the natural fire season, from what you are saying we would expect to see slower recruitment from this species, will that effect last until the winter season?

Mark Ooi: Yes, that’s the surprising thing that this cue lasts. Even up to a year or so later, we have still picked up a flush of recruitment in species with similar dormancy mechanisms. The smoke chemicals are water soluble so once this effect has filtered down into the soil it can remain for a fair while.  The delay between when you burn and when these things come up can be an issue. 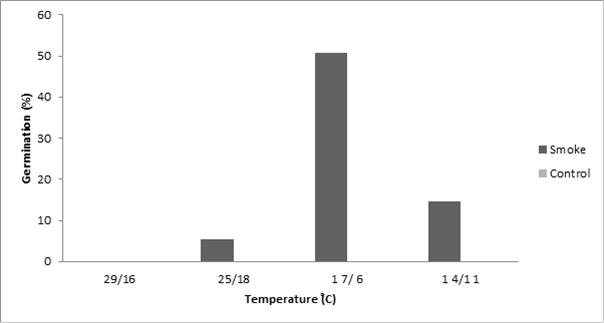 If we look at Figure 1, this shows the germination of Boronia with the peak of germination occurring when winter temperatures arrive (for more detailed data, see Mackenzie et al. 2016).

So how does this affect fire response in the different seasons?  If you have a physiological dormancy mechanism that means there’s going to be a seasonal flush of emergence.  For example if you have a burn that’s come in during summer and there is an autumn/winter response then it’s a relatively short lag between that summer fire and the peak germination time as shown on Figure 2 (a) (modified from Auld & Ooi, 2009) below. If you look at the arrow in Figure 2 (a) above it shows when the fire occurred and then you see the flush of emergence in autumn-winter. 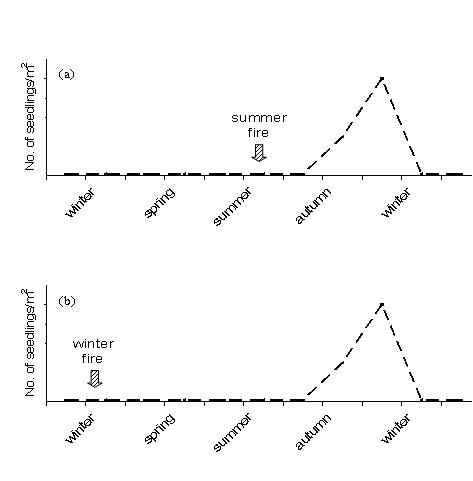 However, if you put a burn in during the middle of winter, you will have a really long lag as shown in Figure 2 (b). These species need a good lead in of at least a few weeks of colder temperatures before they will germinate.  In this case there will be a big lag of time between the fire event and the peak of emergence, and during that time many other species are coming up. You are getting resprouters coming and physically dormant species germinating so by the time this species comes up they’re facing a lot of competition and crowding out from other species and that can have a negative effect. 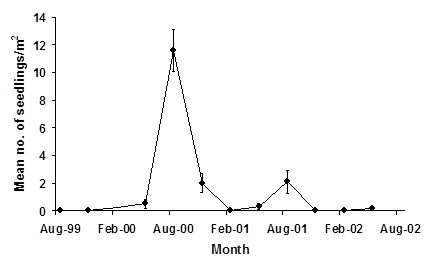 Here is some real data I was collecting during my Honours as an example of that (Figure 3) (for full paper, see Ooi et al. 2004).  This is a fire that went in during August in 1999. We kept going out there to record the first flush of emergence but it didn’t happen until August the following year, a whole year later. We continued recording and a whole year after that first flush another little trickle of emergence came in, which was two years after the first fire event.

Given that these seasonally responding species do come up later we wanted to measure the impacts of this competition on resprouters and other species and see its effects on their capacity to persist. We tagged seedlings after a summer fire and after a winter fire.  The tagged seedlings were adjacent to each other, so they all had similar conditions except for the delayed emergence and the competition that flowed from that. 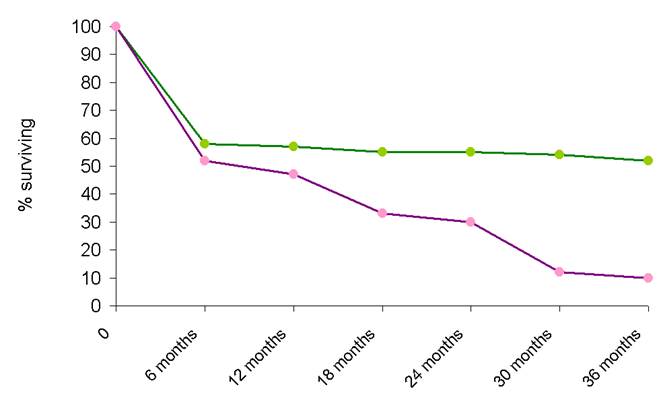 Figure 4 (see Ooi 2010 for full details) shows the survival curve of how many of those plants survived, with the green line showing the number of plants surviving after the summer fire, and the purple line showing the plants surviving after the winter fire. Looking at the winter burn the seedlings came up, followed by an initial die off that happens quite often, and then these plants plateaued. Three years down the track they were starting to grow woody and were looking pretty healthy, and this continued. We have data for up to another five years and we recorded plants producing seeds at around three years plus.

For the plants coming up after the winter fire, looking at the purple line, they had a similar initial die off but then they crashed down and kept crashing.  They kept being out competed so three years on there was less than 10 percent of them surviving.  If you are trying to manage this threatened species this is clearly not a good outcome. 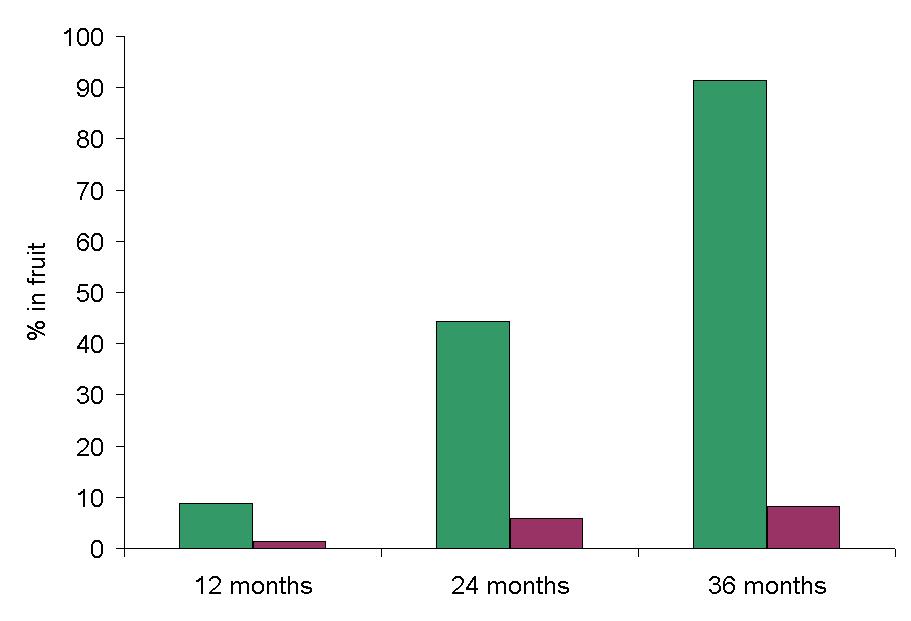 Figure 5 (Ooi 2010) shows how quickly the plants became mature and started putting seeds back into the seed bank, flowering and producing seeds. Again this shows one, two and three years along. The post summer fire is shown on the green bars and you can see that by the third year nearly all of them were producing seeds and putting them back into the soil seed bank.  So you’ve got a functioning population of plants again.

The purple coloured bars came up after the winter fires. There was less than 10 percent of them that flowered so there wasn’t much seed at all going back into the system and it took them another three years before they started to replenish. Therefore, if you burn out of season and you have a situation like this, this is going to affect your frequency.  If you have a species  that normally would reproduce in three years, then you know that if you burnt again in seven years you would have a decent seed bank again. But if you have a winter fire that’s delayed things you might have to extend that frequency depending on when you have burnt it before.

Out of season fires and severity of fires can have a strong effect on how vegetation recovers. When there is a species specific management focus it is important to be careful when and how burns are implemented to best support species to persist.