NCC ecologist, Mark Graham recently helped run a Fire Ecology Field Day at Bonnells Bay, Lake Macquarie. This transcript highlights components of the discussion Mark led at the second site about the importance of small mammals for ecosystem health. There are a few related resources linked at the bottom of the page.

Mark: Within our native forests on the eastern seaboard there is an incredible diversity of small ground dwelling mammals. We have small carnivorous and insectivorous marsupials that dwell in the understories of our native forests, including; antechinus, dunnarts, and in some places, generally further north and west, planigales – all are Dasyurids in the Family Dasyuridae.

There is also a significant diversity of native rodents, including the new endemics, which are basically rodents that have come to Australia in the last couple of million years. Things like the bush rat which looks an awful lot like the feral black rat, but has a much shorter tail. Then there are the old endemics which have been in Australia for significantly longer. There has been an evolutionary radiation, so some of these little rodents made their way to Australia many millions of years ago and diversified into everything from the quite small, nationally Vulnerable New Holland Mice (Pseudomys novaehollandiae), up to things like tree rats found up north that weigh 1/2 kilo to a kilo that would nip your small finger off in a single bite. 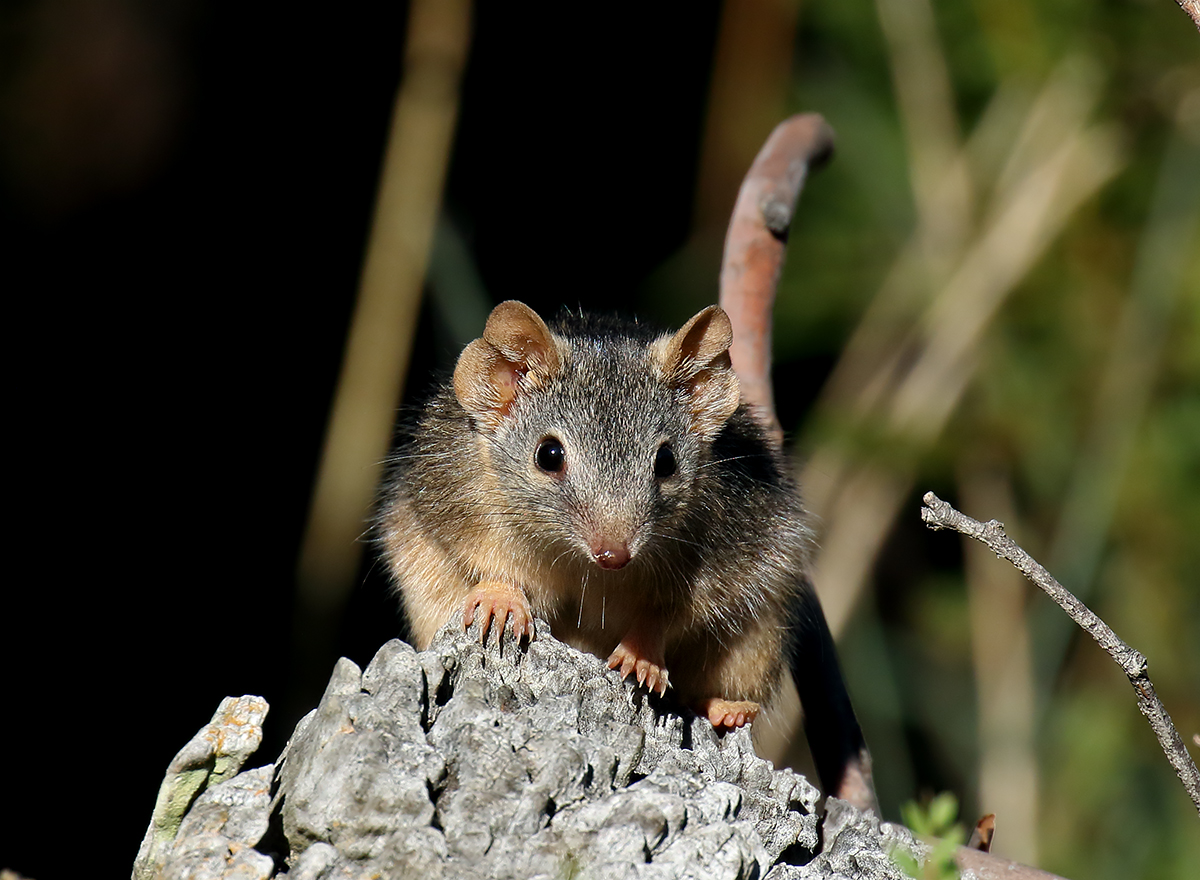 In habitats around this area of Bonnells Bay, the small ground dwelling mammal communities respond strongly to fire. Some of our small mammals, such as the Brown Antechinus (Antechinus stuartii), and to a lesser extent the Yellow-footed Antechinus (Antechinus flavipes) (both “marsupial mice”), generally need quite dense ground cover. So it is very important within a reserve, valley, landscape or community to have patches that are unburnt to make sure species like the Brown Antechinus still have homes. If the whole landscape is burnt and open like this, there is simply nowhere for those species, that need the dense ground cover, to go.

On the other end of the spectrum the New Holland Mouse requires seed, grass seed and grass shoot as its main food source, and the fresh shoots that come immediately post-fire. So when a landscape is burnt there is a nutrient pulse and a boom in resources for the New Holland Mouse. This species is nationally Vulnerable, it’s probably become extinct across 80% or more of its historic range. They are probably lurking in the landscape at very low population numbers until patches burn in the landscape and their populations will boom on the back of the availability of grass shoots, legume shoots, which are rich in nitrogen, and in particular grass seeds. That boom will last a few years after fire and then the population will often quite rapidly taper off after say five, six, seven years post fire when the forest floor is really dense again, and the small mammal assemblages will swing to those that require dense understory.

Now they’re not easy to see, in order to see these creatures you generally need to do one of two things; lay out trap lines of Elliott traps, which is an aluminium box trap that you bait with peanut butter, oats and honey; or for the really small marsupials like planigales you can use pitfall traps.

A pitfall trap is a bucket buried in the ground, often with plastic sheet “drift fences” to guide the small mammal into the trap. For the animals that won’t go in to an Elliott traps, pitfall trapping is often the only way to know if these creatures are actually in the landscape.

These small mammals are a really rich part of our biodiversity and a very important link in ecosystems for converting nutrients from the plant realm into meat and nutrients that feed a whole host of carnivores, birds and bigger native carnivores, quolls and that kind of stuff. 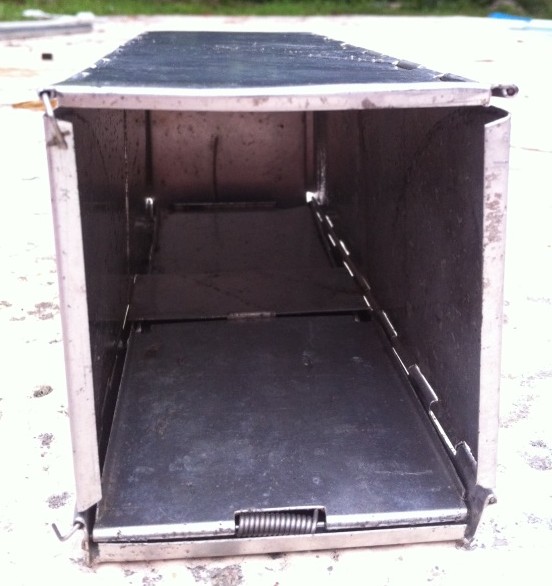 An Elliot Trap can be used to see what small mammals are on your land. Source: Wiki Commons/Drmies

Sadly nowadays allot of these species are vulnerable to predation by cats and foxes. When a site like this is converted from a dense shrubby understory into a very open understory structure many of those small native mammals are incredibly vulnerable to being eaten by cats and foxes. We would encourage you to look at combining active implementation of fire with programs of vertebrate predator pest control, trapping, baiting, fumigation and a host of other techniques. That way we will best manage these incredibly valuable assemblages of small mammals.

There is quite a large published body of literature on the dynamics of these populations but we would always encourage you to develop a better understanding of how these ecosystems tick, how our management of them and the actions we take will influence these populations and really do the best that we can to maximise or optimise the management of particular landscapes for their conservation values. In this case, patchiness is important and there are some refuges in this landscape, there are some patches that weren’t burnt, so if there were small mammal assemblages it is likely that they have retreated to the unburnt areas and the dense understory and will have the capacity to come back and forage.

Audience: Is there any evidence that looks at the top of the chain? Say your raptors? Say if you’ve got predation from feral pests, do we see anywhere an increase in large birds of prey also taking on the ferals? Do we get enough?

Mark: Probably not taking on ferals, but I’m not sure of published literature on that. What can definitely happen when you get these population eruptions is you can get raptor populations responding accordingly. Probably the best example of that is out in the Lake Eyre basin where the rare floods drive explosions in populations of the Long-haired Rat (Rattus villosissimus), also known as the plague rat, which then leads to a massive boom in the Letter-wing Kite (Elanus scriptus) populations. I guess because the east coast is quite fragmented it probably doesn’t operate on quite the same scale, but when you get increases in prey species populations you will get corresponding opportunities for predators to boom in response.

Does anybody within their reserves know whether they have populations of the Long-nosed Potoroo (Potorous tridactylus)? 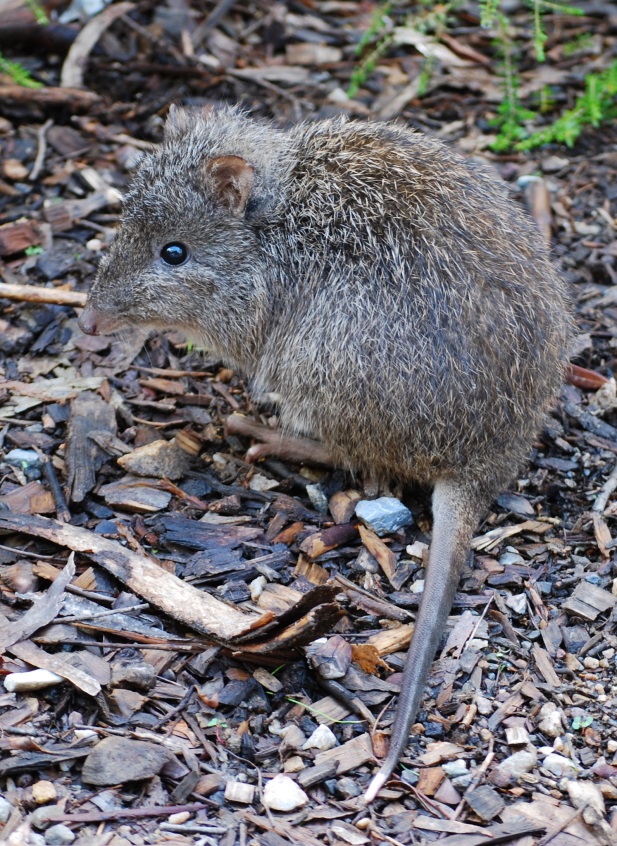 Audience: We know we have it in the top of one of our reserves and that is from doing camera surveys. About five years ago the first camera surveys picked them up and they weren’t known of for 30 years before that, so that was a surprise to us that they were there. One of those reserves is Kincumber Mountain Reserve, which is an island reserve, they are not part of the corridor network, so we don’t really know why they are still there It’s a nice surprise for us and we still need to learn allot more about how they are managing to hang on there and how we manage them with fire and other impacts from humans who are the main users for that reserve.

Mark: That’s so exciting. So if you don’t know, the Long-nosed Potoroo is a primitive small wallaby, a potoroid, so they are the primitive part of the Kangaroo and Wallaby family. They require dense undergrowth. The potoroos have probably declined across greater than 90% if their range, so the fact that they are still hanging in within the urban matrix is very reassuring. As more research is done into potoroos we are learning that they are a really critical keystone species for the health of our forest and woodlands. They dwell in dense understories and dig a bit like a bandicoot and eating truffles. So in areas where they are, the forest or the woodland understory can often be quite churned up and when you get your eye in you can probably spot the particular types of diggings of potoroos compared to bandicoots.

By eating the subterranean truffles they are spread the fungi through their poo throughout the forest. There is more and more evidence emerging that there is a critical interaction between potoroos, fungi and the health of our forest and woodlands. As we go on, we desperately need to hang on to whatever potoroo populations we have and probably look to re-introduce them to certain areas to revitalise and maintain ecosystem function. They have died out across most of the coast and but there are few little patches where there is a decent colony or two remaining and we are exploring some possibilities up on the far north coast, working with private and public lands, to re-introduce them. They are quite hard to find but the new cameras traps are an awesome tool for understanding where they are. I suspect as we go on we will learn that they are even more important than we currently recognize and appreciate.

There is a host of incredible critters in our ecosystems and we need to give special thought to their management. Anyone who has dense forest with dense understory and reasonable patches of bushland under their management might have potoroos and not know or understand it. Some of the habitat is so thick you have to wade through it to actually get to the areas where they are, so I encourage you all to look really closely at where you might have or where you do have potoroos and do whatever you can to hang on to them and to enhance their population.

Alan York from the University of Melbourne gave a presentation at our last annual conference on managing fire for fauna conservation. Click here for the transcript of his speech and click here to access the accompanying slides.