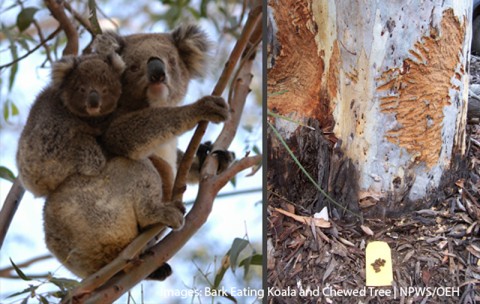 Although the existence of koalas near Cooma had long been known by some local land owners,  the Snowy Monaro Bushfire Management Committee and local Rural Fire Service (RFS) staff only learnt of their presence in the last decade or so.   Koalas are listed as threatened by the Commonwealth Government, as well as the Queensland and New South Wales Governments. While few in number in this region, these animals are particularly special because they are now recognised as ‘bark eating koalas’. The brittle and scribbly gums (Eucalyptus mannifera and E. rossi) and the manna or ribbon gum (E. viminalis) are the most important species for these koalas with the koalas preferring to chew on the brittle gum.

At least several hundred koalas occur across an area of around 100,000 hectares in rugged country to the east of Cooma, Bredbo and Michelago.  The koalas are located on private property, near the village of Numeralla and in several of the Northern Monaro Reserves.  These reserves and properties are oriented north-south and lie approximately 15km east of the Monaro Highway between Nimmitibel and Bredbo.  The reserves are heavily timbered ridge lines located in a landscape largely cleared for agriculture and comprise the western limit of the range that is the escarpment.

The local ABC started reporting on these bark eating koalas from around 2011, and in 2012 as interest grew, stated: “Discoveries of a significant koala population have led to the Cooma Monaro Shire Council being granted funds to develop a Koala Plan of Management. Koala survey work by the NSW Office of Environment and Heritage (OEH), RFS, University of Sydney researchers, and community volunteers over the last 18 months has found evidence of koalas in 50% of the sites surveyed between Cooma and Michelago.  The NSW Environmental Trust has provided a grant of $100,000 to the Cooma Monaro Shire Council to undertake further field survey work to locate the population and study the characteristics of the habitat that is sustaining them.

Project co-ordinator Chris Allen (OEH) says they have found evidence of a scattered population numbering in the low hundreds along the ranges from east of Cooma to east of Michelago.  He says the population appears to be stable at present whereas many other populations across the country are in decline.

The Koala Plan of Management will tie in with the shire’s Local Environmental Plan especially on issues such as permissible land use, bushfire control, and threats to the population such as predation and land clearing.

Immediately that the initial population of bark eating koalas became know the RFS put into place various hazard reduction practices in the koala zones that did not involve fire.  This included manual raking.

By late 2011 the RFS and NPWS had determined the need to carry out a hazard reduction (HR) burn in areas known to be used by the koalas around Numeralla. Toward that end, Oscar the koala detection dog was engaged with his handler Jim Shields to assist with detection before the HR operations commenced. 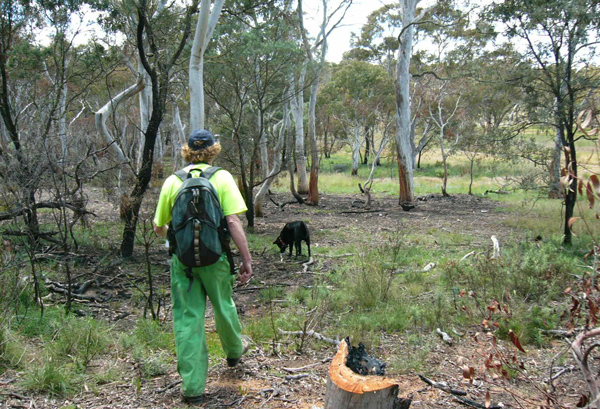 How does Oscar the detection dog do his work?

Oscar works across a series of transect survey blocks with Jim Shields acting as his primary handler, following Oscar’s ‘indications’ and ‘bends’.  An indication of koala presence consists of an extended canine inspection of a micro-habitat, specific area or particular tree trunk.  An indication of locating a live koala consists of a tree stand by Oscar (up on the hind feet on the tree trunk) followed by a sit or down stay. Once a koala is located Oscar is trained to remain stationary until given the ‘free’ command (and a reward).  A ‘bend’ is a sharp change in course of direction, indicating a koala scent trail on the ground.

Where individual koalas or important habitat areas were located appropriate protective measures including no-burn options for each of the burning blocks or the entire operation were devised.

Asset protection in the Risk Plan

Treatments to protect koalas and their habitat have now been formally included in the treatment options in the Snowy Monaro Bush Fire Risk Management Plans.  Modelling through the Phoenix Rapid Fire Model was undertaken by the OEH and Melbourne University, to inform the prediction of fire spread through the Asset Protection Zones of the village of Numeralla and the koala habitats.

Early acknowledgement of and a pro-active approach to these little known remnant koalas sites by the local RFS has been a key driver in obtaining the support of many other players keen to be involved in the protection of the bark eating koalas.  The flow on has included, the now Snowy Monaro Regional Shire Council developing a Koala Management Plan, while further research was undertaken through the Universities of Sydney and Melbourne and funding obtained for research from the NSW Environmental Trust.

The RFS has been ably assisted by NPWS expert Chris Allen, who has for many years operated within the Monaro NPWS nature reserves, and worked closely with volunteers (including myself) and the private landholders known to have koala sites.

Great video with the koalas and Chris Allan