African Lovegrass – fire and weeds in the Cumberland Plain

Home African Lovegrass – fire and weeds in the Cumberland Plain 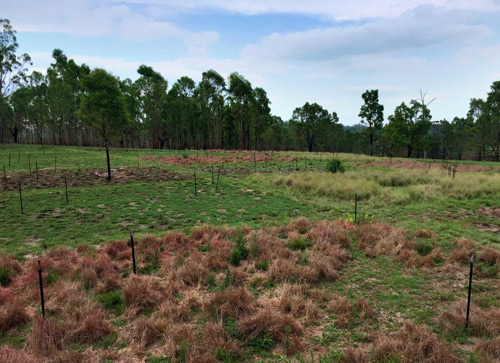 Integrating fire into Cumberland Plain weed management is a very promising approach, supporting a shift from a highly degraded system back towards a resilient system that will resist weed invasion.

At Scheyville and Cattai National Parks in Sydney’s west introduced weeds like African Lovegrass (Eragrostis curvula) thrive in areas that have previously been cleared for agriculture and development. Results from recent integrated fire and weed management trials aiming to support restoration of native vegetation in the Cumberland Plain have demonstrated that it is possible to break the dominance of African Lovegrass, even in the most disturbed sites.

African Lovegrass is a highly resilient species of tussock grass that can suppress the growth of natives and alter grass and woodland systems as it forms monocultures. Being an introduced species, its proliferation also negatively impacts wildlife by contributing to habitat loss. Lovegrass is considered an ‘ecological transformer’ as once it dominates an area the ecosystem is unlikely to revert to a more natural condition without significant management intervention.

The plant and animal diversity in the Cumberland Plain region have been greatly impacted by past agricultural activities and the growth of western Sydney. Restoration of native vegetation is an important management priority for reserves in the area, especially those that include key remnants of unique vegetation such as the critically endangered Cumberland Plain Woodland.  In this project the National Parks and Wildlife Service collaborated with Western Sydney University, the Nature Conservation Council of NSW, The Australian Association of Bush Regenerators, Muru Mittigar Aboriginal Centre and Aquila Ecological to trial integrated fire and weed management treatments to better understand the role of fire in supporting regeneration of native vegetation.

Management protocols for African Lovegrass generally recommend the use of herbicide and caution against the application of fire as Lovegrass rapidly regenerates following fire. The innovative approach of this project allowed us to test the potential benefits of an integrated treatment combining the application of fire and herbicide. Trials were held across 48 plots in two locations in Cattai and Scheyville National Parks.

The trial allowed a good comparison herbicide application, and fire, as methods of controlling African Lovegrass singly or in combination. When applied alone herbicide kills the Lovegrass, but leaves a thick thatch or mat of dead leaves which has potential to restrict recruitment of further species from the seed or bud/tuber bank. Singly, fire reduces Lovegrass cover in the short-term, but resprouting of the basal shoots and seedling recruitment means that the canopy cover is restored fairly quickly, again limiting subsequent recruitment by other species.

The results from applying both fire and herbicide indicated that combining them gets the benefits of both. The Lovegrass sward is removed and consumed by the fire, and the herbicide limits further re-sprouting and recruitment. Of the three ways of combining herbicide and fire that were trialled, the herbicide + fire + herbicide was the most effective at controlling the Lovegrass, closely followed by the fire + herbicide treatment.  The third combination (herbicide + fire) was less effective at reducing Lovegrass at one of the sites (Scheyville), and so would be ranked third in effectiveness.  It could still be used as a treatment for Lovegrass if local conditions dictated this order of application.

The current trials have demonstrated that it is possible to break the dominance of African Lovegrass, even in the most disturbed sites. It is very likely that the benefits from applying these treatments will be even greater when they are used in more intact vegetation, with better native recruitment potential than our current sites. Applying these treatments in more disturbed sites may still be very beneficial when combined with additional treatments to boost native species (e.g. native seed addition).

National Parks staff have found that the easiest and most cost effective solution for managing African Lovegrass in this restoration context is to use fire followed by herbicide treatment. This approach effectively halves the amount of chemical used, and applying the herbicide post-fire is easier for scheduling.

In these African Lovegrass dominated systems of the Cumberland Plain active intervention is required. The project results demonstrate that the use of herbicide or fire in isolation is unlikely to be successful for restoration efforts but combined treatments have a very good chance of success. Active management in these systems will benefit from incorporating fire into standard regeneration techniques.

Integrating fire into Cumberland Plain weed management is a very promising approach, supporting a shift from a highly degraded system back towards a resilient system that will resist weed invasion. As weeds are minimised through this approach it is expected that management will become much easier and require less resources.